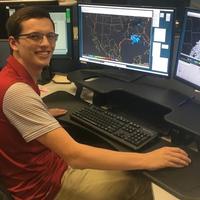 Nolan Meister is a 2nd year Master of Science student in the OU School of Meteorology, set to defend his degree in the summer. He will continue on a career in the NWS thereafter.

Boundary layer evolution and its influence on convection initiation and morphology provide a challenge to forecasters and researchers. In particular, researchers are interested in categorizing the impact that local land cover uses and seasonal changes may have on boundary layer evolution and how that may influence convection. The Chequamegon Heterogeneous Ecosystem Energy-balance Study Enabled by a High-density Extensive Array of Detectors (CHEESEHEAD) project in 2019 provides boundary layer datasets with the opportunity to explore this relationship. This talk will feature two parts: a general boundary layer study, and a severe weather event case study. During the CHEESEHEAD project, two remote mobile profiling systems, the Collaborative Lower Atmospheric Mobile Profiling Systems (CLAMPS), were deployed in northern Wisconsin. Combined with similar remote profiling systems, the two CLAMPS collected continuous high-resolution thermodynamic and dynamic data through the summer and fall of 2019. A similar dataset was collected in central Oklahoma during the summer of 2020 that provides an opportunity for boundary layer comparison across seasonal, spatial, and climatic regimes. Composite static stability and turbulence were compared across the datasets. Results suggest that the two variables are not as closely coupled as would be conventionally thought, with higher turbulence in the summer in Oklahoma despite a more-stable composite boundary layer. In the second part of the talk, focus will shift to boundary layer evolution during a two-day severe weather event. On 19-20 July 2019, the CHEESEHEAD domain was first impacted by an evening severe mesoscale convective system, then a localized tornado outbreak the next morning. The NSSL Warn on Forecast System (WoFS) model was operating at the time, offering an opportunity to perform verification of its boundary layer forecasts. WoFS wind profiles in the boundary layer were compared to radar wind profile data prior to MCS passage, with the results showing that WoFS overestimated the magnitude of boundary layer wind shear. Following MCS passage, WoFS placement of the outflow boundary that influenced the tornado outbreak was verified against observations. Results show that WoFS was too progressive in outflow boundary motion, with the boundary’ s actual northward return influenced by the nocturnal low-level jet. 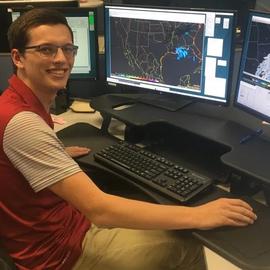