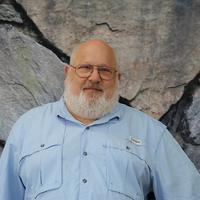 Dr. Alan Shapiro is Professor Emeritus at the University of Oklahoma’s School of Meteorology. He studies geophysical fluid dynamics.

We consider a theory for the generation of a nocturnal low-level jet (NLLJ) within a broad (diffuse) baroclinic zone over flat terrain. The flow can be considered a variant of a Blackadar-like NLLJ: the flow is forced by an imposed surface buoyancy gradient and free-atmosphere horizontal pressure gradient (both of which affect the strength of the geostrophic wind in the boundary layer), with the mixing coefficients (eddy viscosity and eddy diffusivity) changing abruptly at sunrise/sunset with the onset/cessation of dry convective mixing. Following a device introduced by Gutman (1972), we impose a surface buoyancy that varies linearly with a horizontal spatial coordinate (x). As a consequence of this linear-in-x variation of the surface buoyancy, the Boussinesq-approximated equations of motion, thermal energy, and mass conservation can be solved analytically to obtain diurnally varying velocity components. Following a derivation of the solution, results are shown for idealized cases that focus on the strength of the baroclinic forcing, the day- and night-time values of the mixing coefficients, the ratio of the eddy viscosity to eddy diffusivity (Prandtl number), and the temporal behavior of the imposed surface buoyancy gradient. We then present results for a strong NLLJ observed over the southern Great Plains on 1 May 2020. ERA5 surface analyses for the afternoon prior to NLLJ formation indicates that a diffuse east/west oriented baroclinic zone was in place across Oklahoma. The strength and evolution of the velocity components from the analytical theory is in qualitatively good agreement with Doppler lidar observations from the Atmospheric Radiation Measurement (ARM) Southern Great Plains (SGP) central facility, near Lamont, Oklahoma.