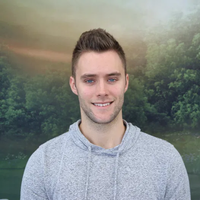 Robert Van Kleeck is a 2nd year M.S. student at OU’s School of Meteorology. He received his B.S. in Atmospheric Science from Lyndon State College in Vermont in May 2018, where he researched winter weather impacts on electrical infrastructure (power lines, wind turbines). He is also an alumnus of the 2017 NWC REU program. His research with Dr. Salesky explores the impacts of urban boundary layer flow on point-source pollutant dispersion using large-eddy simulation.

Urban population currently forms the largest percentage of total human population in recorded history. The World Health Organization reported that 54% of people lived in urban environments in 2015, which is slated to increase to 66% by 2050. Preparing for this massive shift requires anticipating possible health hazards to a metropolitan population, and urban meteorology forms a distinct part of this anticipation. Understanding the impact of large urban cores and central business districts (CBDs) on air quality and urban dispersion will help city planners work towards neighborhoods with effective and safe removal of potentially harmful pollutants, like PM2.5. This requires a framework to understand how pollutants are dispersed in an urban canopy.

Advances in Large Eddy Simulations (LES) in recent years facilitate studying this dispersion in more detail. Entire central business districts (CBDs) can be resolved within the domain of the LES, making it very attractive for urban meteorology. This study aims to utilize LES to quantify scalar plumes in an idealized urban canopy at atmospheric Reynolds numbers. A suite of LES was run over idealized urban geometry (cuboids), spanning a wide range of plan area and frontal area fractions and both staggered and aligned geometry. Simulations will be used to characterize how point-source scalar plumes are influenced by urban geometry; we will demonstrate how plume lateral and vertical moments (centerline, spread, skewness, kurtosis) depend on urban geometry, and how they deviate from the Gaussian plume model in the near-source region. In addition to the plume statistics, the behavior of instantaneous scalar concentration at a point (relevant for an individual’s exposure to pollutants) is of great interest. Probability distribution functions (PDFs) of scalar concentration, joint PDFs of concentration and velocity fluctuations, and PDFs of time periods that concentration exceeds a set threshold will be used to characterize the local behavior of scalar concentration and how it differs from average plume behavior.