As the Spring 2022 semester draws to a close, we are excited to announce that Isaac Medina — a BLISS undergraduate research assistant — has been recognized twice in our National Weather Center community!

First, Isaac was awarded the School of Meteorology’s Faculty Award for Outstanding Performance as an Undergraduate Student. This award recognizes Isaac’s work in the classroom and beyond. Isaac works with Dr. Elizabeth Smith, Dr. Tyler Bell, and Dr. Jacob Carlin of CIWRO/NSSL (RRDD) on a CLAMPS related VORTEX-SE project, and continues his excellent contribution and growth while balancing dual major course work for meteorology and air traffic management in addition to his extracurricular programs such as AMS/NWA and Sooner Air Traffic Control Traffic Control Association chapters, the latter of which he serves as treasurer. He also serves as a student ambassador on the AMS Committee on Hispanic and Latinx Advancement. In the current year, he continues to find ways to teach himself new things, offer up new solutions to problems, and volunteer to help our team when he sees things get stressful or hard.

Next, Isaac was featured in the April A&GS Express Newsletter, where he was given the opportunity to share his own experience through an interview format that was retold in the newsletter. Isaac’s spotlight is reproduced here, but can later be found online on the AG&S Spotlight archive page.

Spotlight: Isaac Medina can’t quite pinpoint his favorite memory from his time with the School of Atmospheric and Geographic Sciences so far; there are too many to choose from. Like visiting the Kessler Atmospheric and Ecological Field Station (KAEFS) to learn how to use the instrumentation inside the Collaborative Lower Atmospheric Mobile Profiling System (CLAMPS) and to see the various unmanned aircraft systems being used for data collection. “It was really interesting to see how everything works on the data collection side.”

Going to his first American Meteorological Society meeting was also a memorable experience. Because the student conference was still held onsite (though the main conference was virtual due to COVID numbers at the time), Medina was able to spend the weekend in Houston, Texas, present his research in person, and meet with the community members outside of OU.

He didn’t know he wanted to pursue meteorology specifically until his senior year of high school. “I knew for quite a while that I wanted to do something in the STEM field, and for a while, I was looking at chemical engineering.” But as he began diving deeper into his high school chemistry courses, particularly AP Chem, he realized that the only part of chemistry that he truly liked was atmospheric chemistry. His chemistry teacher, who was a friend’s mom, suggested he look into the weather.

Medina, who came to the university in the fall of 2019, is pursuing two degrees, one in meteorology and the other in air traffic management. His choice of the two degrees comes at an auspicious time: the School of Aviation is joining the College of Atmospheric and Geographic Sciences, a change announced earlier this semester, beginning in the 2022–2023 academic year.

He discovered the four majors in aviation while looking into getting a minor so he could pursue a pilot’s license. When he went to sign up, the flight spots were already completely filled. He decided to take a chance on air traffic control. “I took the first class and I fell in love with it.

He decided to commit to both loves and pursue two majors. “It’s a lot of driving,” said Medina: south to the NWC and north to the airport. “But it’s definitely worth it. I really like the course material. It doesn’t even feel like work sometimes.”

As if two majors aren’t enough, currently, Medina is getting additional experience working with the Boundary Layer Integrated Sensing and Simulation (BLISS) group at the Cooperative Institute for Severe and High-Impact Weather Research and Operations (CIWRO). “Doing all the instrument work they do is so fascinating to me: being out in the field and collecting that data and looking at it.”

Medina got involved with the research team during the summer of 2021. He was encouraged to apply for the Real-World Research Experiences for Undergraduates program at the National Weather Center and was accepted. He worked on a project about different measurement methods for boundary-layer height during the evening transitional area from the convective to the stable boundary layer. After the completion of the program, Medina was asked to continue working with the group, and he is already tackling a new project.

Medina plans to go to graduate school. “A lot of the work I want to do is either focused on either safety or education for our aviators concerning meteorology.” He strongly believes in educating pilots thoroughly in meteorological concepts so they are better prepared to make decisions concerning flight.

Medina wants current high school seniors to know it’s okay to not know what you want to do. “It’s okay to switch your major. Look and try different things… Really experience what there is out there.” 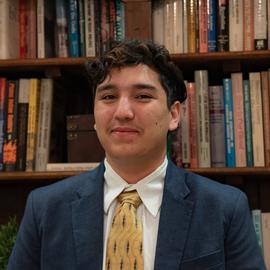