Towards Novel Instruments for Precision Meteorology

Highlights of the CopterSonde development Uncrewed aerial systems (UAS) have been around for decades and their increasing popularity in recent years has become notorious around the world. Today, there is a wide range of drones available in the market with different size, shape, and features. It is easy to find one in online stores that will likely suit your needs. Most people will simply buy a ready-to-fly drone from the market. Other people who like do it yourself (DIY) builds can find joy in putting together kits of these machines piece by piece. Lastly, there is also the kind of people that takes the real challenge of studying, designing, and adapting their own ideas into the UAS with the purpose of solving an existing problem.

I tend to be part of the latter and I’m always curious about how drones can benefit humanity in unique ways. I was given that opportunity in 2017 when Dr. Phillip Chilson brought me to OU and made me part of an amazing team of engineers and meteorologists. By the time I arrived, the CopterSonde was already a conceptualized idea that was brought to life by Bill Doyle. The CopterSonde is a specially designed weather drone for in-situ weather data acquisition in the lowest layer of the Earth’s atmosphere, the boundary layer.

Over the past few years, I’ve learned that the acquisition of weather data using UASs is a newly established challenge in the modern meteorology research. The overarching goal is to provide forecasters with reliable data in a timely manner to support them in their mission of protecting lives and properties, and help increasing the nations prosperity. This is exactly what motivated me to start digging deep into this project and put in my own grain of sand.

So, what’s your current opinion about drones in weather studies? I’ll walk you through some highlights about my developments on the CopterSonde. Hopefully, this will help you understand the capabilities that the drones have as a scientific tool and stop seeing it just as toy.

Despite presenting attractive and unique features, UASs must still undergo several studies and evaluations before its data get fully integrated and assimilated into the weather forecast models. Several recent collaborative field experiments have encouraged researchers and engineers to start characterizing and assessing UAS for measuring weather parameters, and identify the challenges for improving weather measurements using UAS. This initiative led to the development of many innovative UAS designs for weather sampling such as the CopterSonde, and even envisioning future concepts of operations and research communities.

The real first challenge of the CopterSonde was during the EPIC campaign in 2017, where the sensor accuracy and maximum altitude requirements were somewhat tough to achieve back then. We, the engineers, had to work day and night to create a compact and reliable system that could read the weather sensors aboard the UAS while performing an autonomous flight up to 762m AGL. Dr. Arturo Umeyama and I successfully created custom code for the autopilot that not only read and stored sensor data, but also streamed it down to the ground station for live monitoring. This was a big deal that helped the users to not fly blindly but also change the trajectory on the fly. The experiments were rather successful and we came home with lots of gained experience.

Soon after the EPIC experiments, we received the news that we were going to be sent to Finland, close to the artic pole, to study the weather over the artic sea ice known as the ISOBAR project. In only half a year, we made a huge overhauling of the CopterSonde and prepared it to endure the extreme winter conditions in Finland. We had to significantly reduce the size of the CopterSonde and fit it inside a small container for air travel. At the same time, great code advancements also took place and the custom wind vane flight mode algorithm was introduced. A revolutionary concept that changed the way the CopterSonde was sampling the air, which consists in automatically turning the drone into the wind and placing the sensors in the frontmost section. This new technique enabled us to produce unprecedented results in the super stable boundary layer up to 1,800m AGL. Without a doubt, the ISOBAR project pushed us to make epic breakthroughs in the development of the CopterSonde.

After the successful flight operations in Finland, we came back home knowing that we had a robust weather instrument on our hands. We focused our work on streamlining the design and making the CopterSonde more user-friendly for the next field campaign, LAPSE-RATE, just half a year later. CAD software and high-end 3D printers enabled us to create innovative modular shell design with a special compartment for the sensor package. Gustavo Azevedo and I rearranged the custom autopilot code and organized it in a way that eases the learning curve, facilitates adding upgrades, and provides official release notes for code tracing. LAPSE-RATE took place in the San Luis Valley in Colorado, a region characterized by its high-altitude and low air density conditions. But this wasn’t an issue for the powerful and lightweight CopterSonde flying at altitudes close to 10,000ft MSL.

The CopterSonde project was born as a branch of a larger project idea known as the 3D Mesonet. The 3D Mesonet is an ambitious idea that envisions the future concept of operations of a large network of fully autonomous and unattended UAS distributed over the state of Oklahoma, and beyond, for weather data collection. This requires the CopterSonde to be ready for an eventual no-human intervention during flight operations. Therefore, the latest upgrades on the CopterSonde were around the smart battery management and improvements in the remote user interface with the system. This puts the CopterSonde in a position ready for the next step on unattended flights.

Current state of the CopterSonde

The CopterSonde has reached a very mature stage in its development. After 4 years and several prototypes, the actual CopterSonde has excellent traits in scalability, user-friendliness and reliability. Manufacturing the CopterSonde has become simpler over time thanks to the thoughtful arrangement of the electronics, access to 3D printing, and some good manual skills! The video below shows a time-lapse of the in-house assembly of the CopterSonde. If you are interested in learning more about the technical aspects of the CopterSonde, you can check out my journal paper. In addition, in case you are thinking that this sounds like a great invention, we submitted a request for patenting through OU! The CopterSonde is now under a patent pending process and you can follow its progress here.

Apart from the prototyping, the CopterSonde comes with its own suite of software tools that can ingest the raw data and produce readable weather products. Advances in post-processing software designed specifically for the CopterSonde were possible thanks to the work done by Tyler Bell, Brian Greene, and Joshua Martin. Some useful products generated based on data acquired by the CopterSonde are the Skew-T Log-P figures and time-height temperature evolution contours shown in the figures below, respectively. These two types of visualizations allow atmospheric scientists to understand small-scale ABL processes in frameworks they are already familiar with from radiosondes and ground-based remote sensors.

One might think, how long until the current technology in the CopterSonde becomes outdated? The answer is years from now! As mentioned above, the selected hardware in the CopterSonde is meant to be scalable and modular! Meaning that there is an ongoing autopilot software development that brings new features and new compatibilities with existing peripherical devices. The latest additions were a lidar-type range finder for precise height measurements and an infrared camera for precision landing over a small footprint target. However, there is a lot more going on under the hood of CopterSonde. The autopilot has recently got a massive improvement in motion detection that significantly improves the ability to estimate external forces acting on the drone and, hence, 3D wind estimation!! That’s right, including vertical wind speed!! The entire CopterSonde body will soon act as a wind sensing element without additional dedicated wind sensors. While work is still in progress, some preliminary results show that the accuracy can be comparable to a Doppler wind lidar.

What is next on the CopterSonde project?

Fly more and collect more data! The experience in the field and the feedback from the users are shaping the CopterSonde. We believe that weather drones will make a great impact in weather data collection over traditional methods. We know this so well that we put together instruction manuals and training programs on how to use the CopterSonde and related equipment. OU students that are related to the weather studies and are interested in volunteering can join and help us carry out experiments and move forward with this ambitious project. You can contact Liz Pillar-Little or Elizabeth Smith if you want to learn more about this opportunity. 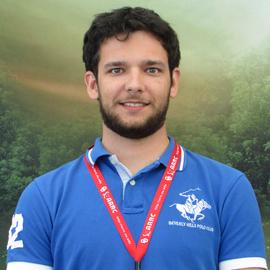 My research centers around developing small unmanned aircraft systems for adaptive atmospheric sampling which involves CAD modeling, systems optimization, hardware and software integration, and control theory. I have led the design of the CopterSonde series of vehicles, which is used to perfrom controlled and targeted weather sampling at high temporal and spatial resolutions. I am also advising other projects in which sensor integration or new UAS are required.